Our first attempt to summit Mt. Elbert and climb our second 14’er was quite an adventure. Mt. Elbert sits at 14,440 feet claiming it’s place as the highest peak in Colorado and the second highest peak in the lower 48. We took the opportunity to climb Elbert on a Sunday morning since Clayton miraculously happened to have the day off. Since moving to Colorado, we’ve had completely opposite work schedules, making it nearly impossible to go on day trips and big hikes. On Saturday, I was in charge of packing our gear, loading up the car, and taking a nap so I could drive the 2 and a half hours to the campsite from Colorado Springs. We picked Clayton up from work and left the Springs around 11:00 PM. We made it to the campsite past 1 in the morning and found ourselves among tents and RV’s with people still awake and sitting around their campfires. We set up camp quickly, bundled Riley up in his sleeping bag, and set our clocks for 5:30 AM. The plan was to get up, eat breakfast, and leave as soon as possible. It’s common knowledge for those who hike 14’ers that you need to start early, typically around sunrise so you can start hiking down by noon to avoid thunderstorms. Well, apparently we enjoyed our sleep too much, that things didn’t quite go according to plan.

The alarm went off at 5:30, I slept another 30 minutes and climbed out of the tent, then Clayton followed. We peaked our heads in the tent every few minutes and gently called Riley’s name. He didn’t budge. After several attempts to wake him, nothing seemed to work. The kid loves camping and he looked incredibly comfortable snuggled in his sleeping bag. Fast forward an hour, we have Riley up and we’re packing away the tent. We drove a couple miles up a dirt road from our campsite and parked about a quarter mile from the upper trailhead to the South Mt. Elbert trail. At 8:15 we finally started our hike, over 2 hours behind schedule.

Roundtrip from the upper trailhead is 7.6 miles. The trailhead sits at 10,440 feet with an elevation gain of 4,000 feet to the summit. The first few minutes of the trail began with a slight climb then a very steep hill welcomed us several minutes into the hike. The trail doesn’t level out until after tree line which contributed to a very intense, heart pumping experience for the first half.

In the beginning, we were engulfed in a forest of aspen trees. The colors, the smell, the beauty surrounding us was overwhelming. As we climbed higher, the aspen became shorter until they disappeared. We soon found ourselves amongst a few pine trees before we reached tree line. As the trail slightly leveled and we were no longer surrounded by trees, the sight of the wildflowers was a treat in itself. Bright colors of yellow, purple, pink, and white covered the side of the mountain. I mentioned to Clayton how I felt like Julie Andrews in The Sound of Music. I just wanted to prance around the side of the mountain while singing about my favorite things. 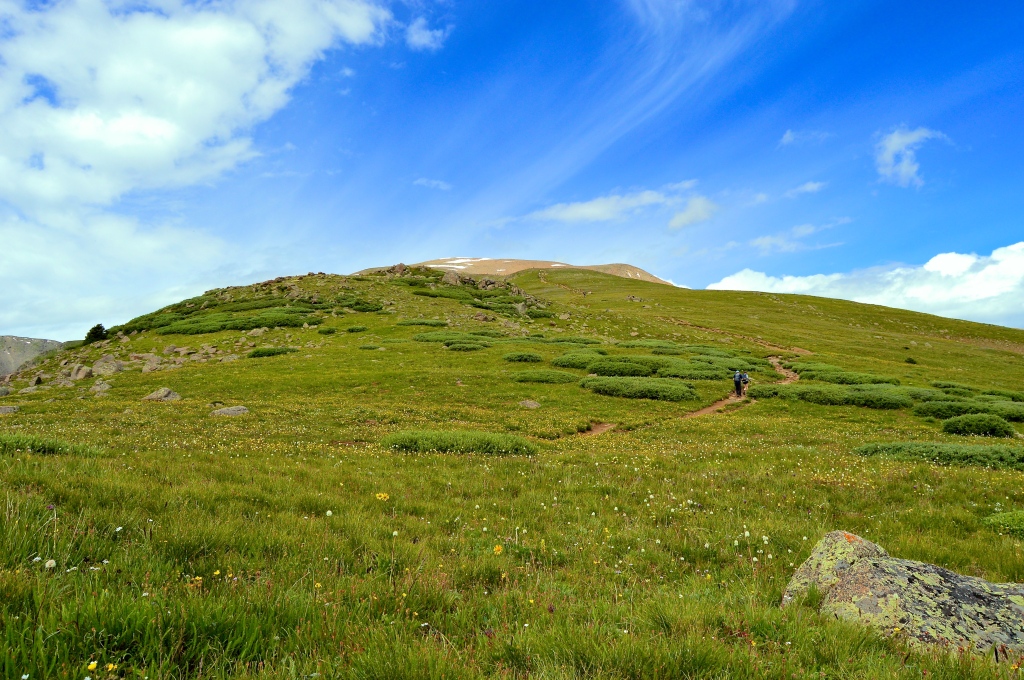 Riley enjoyed the sights and started the hike with a ton of enthusiasm, but after we reached tree line, he started to lose motivation. He complained that his feet hurt and that he was hungry, yet he didn’t want to eat. He asked to stop for water breaks several times, sat on every rock he encountered, and stopped about 5 times to pee along the side of the trail. He also became very obsessed with his heartbeat, asking us to stop and feel his chest everytime he felt it work a little harder. The frequent stops along with the late start caused a bit of anxiety for me and Clayton. We knew that time and weather was not on our side. 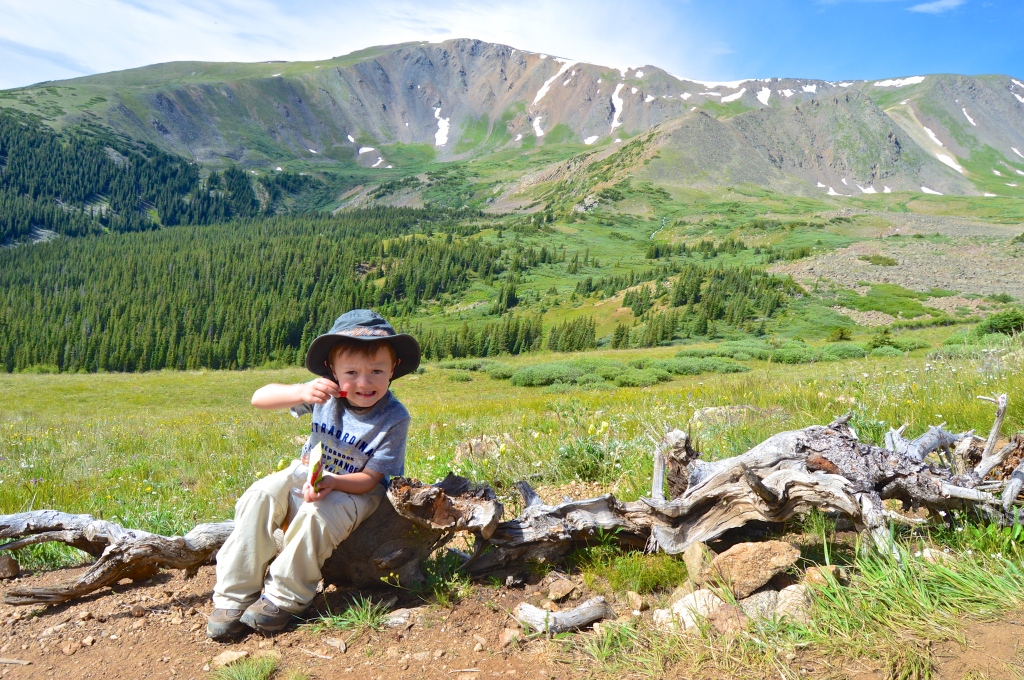 As we began to approach the summit, dark clouds began to hover over us and the wind suddenly turned bitterly cold. We put our jackets on as unexpected snow flurries fell over our heads. We spoke to a nice man hiking down in the opposite direction and asked how long it took him to get to the summit from where we were standing. He answered, “about 40 minutes, but I was moving pretty slow.” We continued to climb for another 15 minutes until the flurries became worse. Heavy rain could be seen in the distance and the entire summit was engulfed in a big cloud. We stopped about 30 minutes from the summit, realizing that we couldn’t go on. We tossed around the idea of carrying Riley to the top so we could make it up faster and be able to say that we bagged another peak.

It was past noon and we had been hiking for almost 4 hours. A part of me wanted to continue because we were so close, but the other part of me was terrified of becoming a lightning rod and it wasn’t worth the risk of putting ourselves and Riley in danger. We decided that instead of hiking up another 30 minutes, we would sit and rest before making our descent. The flurries turned into a hard downpour of rain and we knew we had to move fast down the mountain. Clayton carried Riley as we quickly made our way back to tree line. Riley, exhausted and bundled up in his warm jacket, fell asleep in Clayton’s arms for a few minutes. When we reached the pines, we sat under a tree and waited for the rain the lighten up. As soon as we saw a small break in the sky, we quickly made our way back to the aspen trees.

By this time, Riley showed us that his motivation was back as he jumped down rocks and asked to take pictures. I was relieved to see some spark in Riley again. Over 6 hours after the start of our hike, we found ourselves back at our car. We were tired, but not completely exhausted. Although we were unable to reach the summit, there was a feeling of content since the hike was not only challenging, but incredibly beautiful. It was also gratifying to know that it was the weather, a circumstance out of our control, that contributed to our inability to reach the summit, and not a lack of motivation.

We were also so proud of Riley. Despite the complaints he had when we reached tree line, he showed determination and strength as his little legs climbed up that mountain. We continue to remind ourselves that with hikes this difficult, any person of any age (including myself) will show a variety of emotions while accomplishing something this challenging. Our 4 year old’s emotions during these physical challenges are completely normal. Riley continues to amaze us and other hikers especially since he was, once again, the youngest hiker on the trail.

Our plan for our next attempt at Elbert is to hike until tree line and camp, then continue to the summit on the next day. We saw tents around this area and thought it was a great idea especially with Riley who has a hard time waking up early. Overall, Mt. Elbert is a 14’er we’ll definitely find ourselves climbing again. Even though we didn’t make it to the peak, I’d say it was a successful hike and an experience we’ll always remember.