By Emmy M. in Uncategorized on December 10, 2015
No comments

From the beginning of this road trip, I’ve done some reflecting on my place in this world. Our first night in Moab, we sat outside staring up at the stars realizing how big the universe is and how insignificant we are compared to everything in nature. I recently read something that said…

As we started our road trip, I was on this high thinking “hell yes, I’m finally living life to the fullest.” All the things I used to worry about no longer mattered, until I was reminded that I had a student loan payment due. Suddenly, all of the worries of “normal” life started to kick in. This time, my worries were slightly amplified since I am no longer employed and I am depending on my savings to pay bills and daily necessities. I was slowly returning to who I was pre road trip. I was worried, I was anxious, I was unable to be present in the moment. It sucked.

We spent a total of 5 days in Moab and the first 3 days were glorious. The weather was amazing! We spent our days at Arches and our nights sitting outside the trailer gazing at the clear skies and the bright stars. On day 4, gray skies greeted us and a small amount of rain followed. Our plan for the day was to drive in to Moab, find a laundry facility and get organized before our departure. We spent the morning watching movies in the trailer then I said “hey, let’s go to Canyonlands real quick to take pictures then we can go in to town, do laundry and get dinner.” Clayton thought it was a great idea. We left our 4 wheel drive truck and brought our 2 wheel drive Jeep Patriot to save gas on the 25 mile drive to Canyonlands. The rain was off and on, but it wasn’t anything significant, so we didn’t think twice.

We arrive at Canyonlands and the ranger station at the entrance was closed. We drove right through and on the left side of the road was a sign for an off road trail along the shelf of the canyon. We were warned with a sign that said “4 wheel drive is recommended.” We’ve been on several roads that recommend 4 wheel drive and find that the warnings are often unnecessary, so we continue through while scoffing at the sign. About 15 minutes into the drive, the rain starts to pour. That’s when the little voice inside of me said, “maybe we should turn around.” After an intense downpour, the rain finally stops and the brightest rainbow I have ever seen is arched across the canyon. I quickly grab the camera and step outside to find super slick mud that is forcing me to lose my balance. It was so slick, I literally had to hold onto the car to keep from falling.

I yell at Clayton inside the car and tell him that the tires are completely covered. He tells me to get inside the car and keep moving. Once I try to drive forward, the car starts sliding left and right. I panic! Holy shit, there is absolutely no traction. I think it would have been easier to drive on ice. I force Clayton to get in the driver’s seat and tell him that we need to turn around. Clayton disagrees, saying that we can’t turn around safely because the road is too narrow and the mud is too slick. He tells me that we need to keep moving, he saw a sign that said the trail is only 4 miles, so we’ll drive down the canyon and find another road out. I trust him, but I am terrified.

We were moving about 5 mph trying to stay within the middle of the road and trying to maneuver safely on the sharp turns and steep slopes. That may have been the first time I have ever truly feared for our lives. I felt sick.

We finally make it down safely, I thank God and say my hallelujahs, but we weren’t in the clear. Little did we know that as soon as we made it down, there was a road to the left that could have taken us out of the canyon. We saw another car coming in the opposite direction so we thought if we continued on the same road, there would be another way out. It was impossible for us to drive back up the shelf road, so at the time it made sense to keep going straight.

That decision turned out to be a terrible one. Long story short, after driving our 2 wheel drive over big boulders, giant rocks, crazy twists and turns, darkness falls upon us and we find ourselves 25 miles into the middle of nowhere. I tell Clayton we need to stop. Riley was car sick from the bumpy ride and it was so dark, there were a couple times where we almost drove off the trail towards the edge of the canyon. The thought of driving off a cliff was making me nauseous. We finally stop about 8 miles past a group of campers. The sight of other people brought a little bit of solace. I thought, we can always ask them for help if we need any. And just as I thought that, the gas light comes on.

There we were stuck in the middle of Canyonlands, in the middle of a storm, running out of gas. It was 7 PM and we hadn’t eaten since lunch. We were supposed to grab dinner after doing laundry in Moab, but now we were spending the night in the car. Luckily, the Jeep was filled with 2 duffel bags worth of clothes and 2 blankets. We grabbed all of the sweaters and jackets we could find and snuggled up in the front seat. We had a bottle of water, small amount of bread, organic lollipops, and peanuts. We gave all of the food to Riley and I told myself that if I get really hungry, I could eat the peanut shells. Sitting there and reflecting, I was pissed. I was pissed that I decided to go to Canyonlands, I was pissed that Clayton suggested we drive on the shelf wall, I was pissed that we were not prepared for an emergency when we typically are. I was also pissed that I was hungry and that we put Riley in that situation.

As expected, we had a terrible night sleep. The winds were so strong, I woke up several times to the Jeep rattling side to side. The rain poured off and on, and it was cold. I just wanted to see the sun come up. Finally, daylight breaks and I check my phone to see that I have a couple bars of reception. We call my mother in law and ask her to Google the number for the ranger station. At 7 AM, we call the ranger and ask if there is another way out of the canyon. The ranger tells us that the trail we are on goes on for hundreds of miles and that the best thing to do is drive back up the shelf road. We could take the other trail we passed, but it is 12 miles off road and it would take us a lot longer. The ranger also said to hurry because the rain would return by late morning. We realized we had no choice but to drive back up the shelf road or risk running out of gas on the 12 mile road. 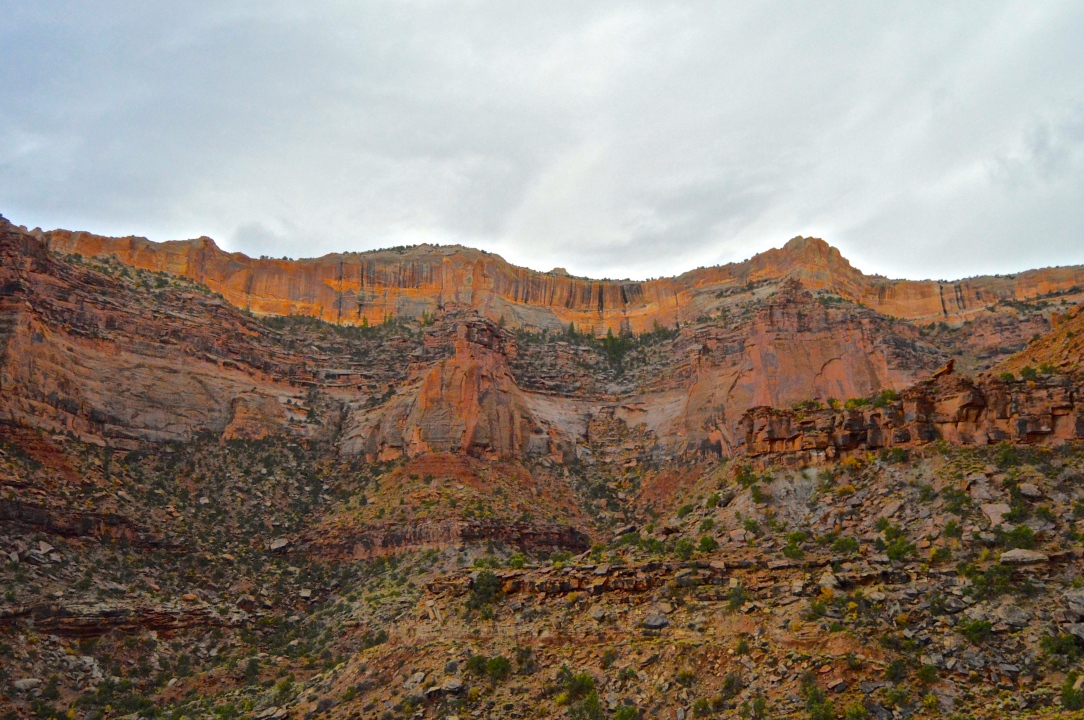 We tried to get back to the shelf road as fast as possible. We passed one car coming in our direction and asked the man if the mud on the shelf had hardened. He said it had and that we shouldn’t have a problem going back up. As we continued on the bumpy ride, somewhat anxious about our gas tank, I looked out into the canyons and marveled at how beautiful the scenery was. If this were just a normal day, I would have taken a million photos. But at that moment, I was sick to my stomach and not in the mood to take out the camera.

An hour and a half later, we were finally face to face with the wall of the canyon. We said our prayers and headed up the shelf. We prayed hard… we prayed that we wouldn’t fall off the canyon wall, we prayed that the mud had hardened, we prayed that we wouldn’t run out of gas. I clutched onto this tiny Santo Nino statue my mom had given me. The entire ride up, I felt my heart beating out of my chest. Before we knew it, we were finally at the top and the sight of pavement never looked so good. Luckily, most of the drive back to the campsite was downhill so we cruised back trying to avoid hitting the accelerator.

On the drive back to the campsite, Clayton and I laughed. We recounted all of the mistakes we made and laughed at how stupid we were. As we talked and laughed, I found myself reflecting, and I was humbled. That student loan and the overall thought of money didn’t matter anymore. Yes, I’ll take care of my bills and we’ll figure out how to make our finances work, but the way those insignificant things messed with my mind was not worth it. I just spent the last 12 hours worried about falling off a cliff and being stuck in the middle of nowhere. Spending my days worrying about money now seemed stupid.

I pictured what we must have looked like from an aerial view. Nothing but land and canyons around, and our tiny Jeep Patriot in the middle of it all. I thought about how we really are insignificant in nature and how our lives are so short compared to many other things on this planet. I then thought about my life pre road trip and how miserable I was, and how I used to spend most of my energy focused on the wrong things. Now there I was recovering from a terrible night, yet laughing uncontrollably with my husband in the car. It was then that I realized we had made the right choice by going on this trip. Regardless of the ups and downs, the future mishaps we may encounter, we made the right choice. At the time, I didn’t realize it, but I needed to get lost in Canyonlands.

When we got back to the campsite, we quickly hopped in the truck, grabbed the gas can, and headed to Moab for food. We inhaled our breakfast (thank you Moab Diner for the vegetarian options) and Riley happily ate his chocolate chip pancakes and delicious hot chocolate. Sitting there, I looked at Clayton and Riley and thanked God for these two. We were safe, we were full, and we were happy. At that moment, nothing else mattered. Thank you, Canyonlands for bringing me peace and humility. That was definitely an experience I will never forget.