We rang in 2016 in South Lake Tahoe, California. Growing up in the Bay Area, we were very familiar with Tahoe and its beauty. We knew it would be cold and snowy, but our plans were filled with hikes and more hikes. I imagined picturesque views of the lake where we would play in the snow everyday and take awesome photos we could share with friends on Instagram. Unfortunately, our time in Tahoe was not as eventful as we had hoped. We came down with terrible colds during the holidays and for a family who rarely gets sick, this was a big blow for us. Our immune systems seemed to have taken a toll from the holidays and we found ourselves in very bad shape. So forewarning, this post is short. Our time in Tahoe was mostly spent indoors, wrapped under a blanket indulging in cold medicine and probiotics. But no worries, we made it outside for one hike and of course, food!!

Bear took a break during this trip since we were able to stay with our friends in their cabin. It was of course a holiday, so they made reservations for all of us to go out to dinner. We were sick and the only ones with a kid, so we offered to stay home so they could enjoy their night out. They insisted and even confirmed with the restaurant that there would be items on the menu to fit our dietary restrictions (we are Pescetarian, the only meat we eat is seafood). It was a thoughtful gesture, so we went ahead and joined them for dinner at Latin Soul.

To our surprise, the restaurant was located inside a casino. One of our friend’s opted for the $35 all you can eat Brazilian barbeque and was disappointed at how dry the meat was. We ordered a vegetable soup and confirmed with the waitress that it was vegetarian. She said yes, but after careful inspection discovered the soup had bacon. On a positive note, we traded in the soup for a chile rellano and it was pretty delicious. Staff was also really nice. Long story short, I wouldn’t return here. But per yelp reviews, the food is good, except the Brazilian barbeque.

Heidi’s has the most amazing breakfast. It’s one of those restaurants known for their giant portions, but in addition to the big plates, the food is also incredibly delicious. We shared an omelet, home fries and pancakes. The pancakes stood out and I enjoyed every bite. My only regret is ordering juice and getting a refill. Refills aren’t free and that tacked on another $6 to our bill!  My advice: get there early and don’t arrive starving because they have a long wait. And don’t order drinks if you’re on a budget!

It’s a short and easy hike to Fallen Leaf Lake. We were thrilled to be back among pine trees after spending the holidays in the busy jungle of the SF bay area. Along the way, we had a snowball fight and we were in awe of the scenery once we made it to the lake. I would have loved a more challenging hike, but our bodies were trying to beat our colds so it turned out to be just perfect for us. Click on the link to trip advisor above for more details. 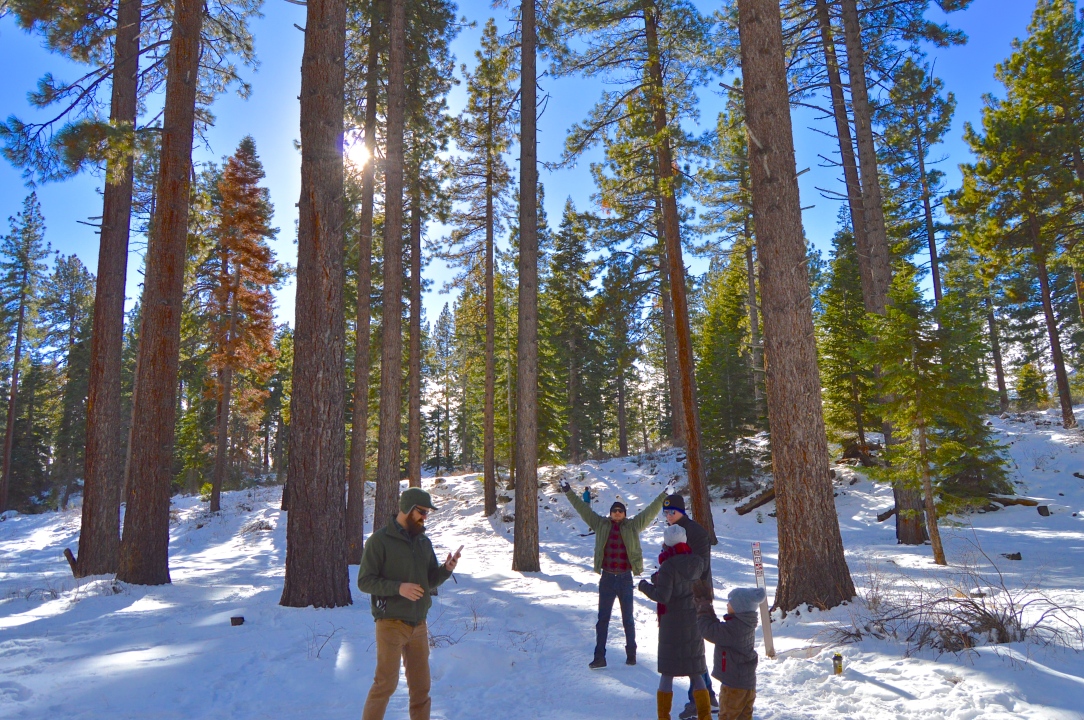 Although we spent most of our time indoors, we felt like our time at Lake Tahoe was the perfect transition from the holidays in the Bay Area to going back to our lives on the road. After we left Tahoe, we headed north to Chico since Clayton wanted to show me the town where he spent his first years of college. I was intrigued by Chico, but more so wanted to see the Sierra Nevada Brewery. Unfortunately, Sierra Nevada turned out to be a bust. Minors are not allowed on the tour (we thought it would be similar to the Coors Factory) and their restaurant was closed, so we used that time to catch up with friends in the area. While in Chico, I got word that my grandparents were asking if we were going to visit. We thought “well, we’re this far north, we should just go!” That’s the beauty about this road trip. Next stop, Oregon!